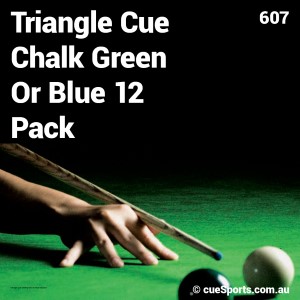 The Triangle Cue Chalk is designed to make it easier for the player to grip the cue ball to take the shots. This chalk is considered by many pool and snooker players as the best cue chalk to prevent miscues. Cue chalk must be of high quality since it is the only part of the cue that hits the ball.

Triangle Cue Chalk was produced by Tweeten Fibre Co. in the US and has been in the market for 75 years. It is one of the best cue chalks and is famous worldwide. Snooker players prefer this chalk because of its firmness and giving them confidence in every shot. The cue chalk is available in green or blue and sold by the dozen.

Triangle cue chalk can reduces the possibility of having miscues. Cue tips are made from leather, while cue ball is made from a smooth polymer both have slippery surfaces. Hitting the ball without the chalk will slide off the cue ball, and you will surely miss.

Triangle Cue Chalk is made from corundum and crushing silica. The unique mixture is the solution to the rounded, slippery surfaces.

The chalk produces friction and grip between the cue ball and the cue tip. The player makes the cue ball spin by hitting it away from the centre. It is hard or sometimes impossible to make the cue ball move around the table without the cue chalk.

Chalking can be done every two or three shots. But if you are using high-quality chalk like the Triangle Cue Chalk, you can do it less often.