It is the player’s responsibility to be aware of all rules, regulations and schedules applying to competition. While tournament officials will make every reasonable effort to have such information readily available to all players as appropriate, the ultimate responsibility rests with the player.

1.2 Lagging to Determine Order of Play

The lag is the first shot of the match and determines order of play. The player who wins the lag chooses who will shoot first.
The referee will place a ball on each side of the table behind the head string and near the head string. The players will shoot at about the same time to make each ball contact the foot cushion with the goal of returning the ball closer to the head cushion than the opponent.
A lag shot is bad and cannot win if the shooter’s ball:
(a) crosses the long string;
(b) contacts the foot cushion other than once;
(c) is pocketed or driven off the table;
(d) touches the side cushion; or
(e) the ball rests within the corner pocket and past the nose of the head cushion.
In addition, a lag will be bad if any non-object-ball foul occurs other than 6.9 Balls Still Moving.
The players will lag again if:
(a) a player’s ball is struck after the other ball has touched the foot cushion;
(b) the referee cannot determine which ball has stopped closer to the head cushion; or
(c) both lags are bad. 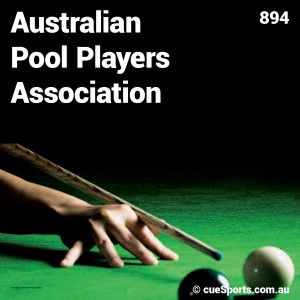 How did APPA come into existence?

American pool in Australia is a growing market. After running many successful tournaments for all levels of play over the past 10 years I was personally approached in late 2019 by the current President of the Australian Pool Players Federation to discuss the future of the APPF.

The APPF organisation had various challenges with only a small number of people who could dedicate the time to govern and improve the sport at a national level.
I was asked to assemble a team that would be able to modernize the brand, events, provide national governance, produce appropriate documentation and policies with a view to Sports Australia recognition.

It has been an absolute mammoth task with countless hours of working on weekends, late nights and Thursday evening team meetings. On June 30, 2020, the APPA was officially incorporated with the NSW Department of Fair Trading and recognized as the National Sporting Organisation for American pool in Australia.
I would like to personally acknowledge the APPA team for their personal efforts and ask that all the players to join their new association with a view to an exciting and transparent future with great opportunities for our cue sport community. 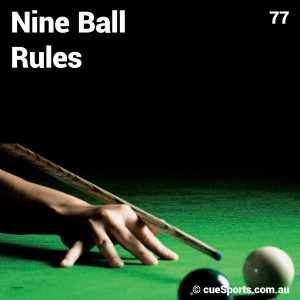 2. Nine Ball
Nine ball is played with nine object balls numbered one through nine and the cue ball. The balls are played in ascending numerical order. The player legally pocketing the nine ball wins the rack.

2.1 Determining the Break
The player who wins the lag chooses who will break the first rack. (See 1.2 Lagging to Determine Order of Play.) The standard format is to alternate the break, but see Regulation 15, Subsequent Break Shots.

2.2 Nine Ball Rack
The object balls are racked as tightly as possible in a diamond shape, with the one ball at the apex of the diamond and on the foot spot and the nine ball in the middle of the diamond. The other balls will be placed in the diamond without purposeful or intentional pattern. (See Regulation 4, Racking / Tapping of Balls.)


top
2.3 Legal Break Shot
The following rules apply to the break shot:
(a) the cue ball begins in hand behind the head string; and
(b) if no ball is pocketed, at least four object balls must be driven to one or more rails, or the shot is a foul. (See Regulation 17, Open Break Requirements.)

2.5 Continuing Play
If the shooter legally pockets any ball on a shot (except a push out, see 2.4 Second Shot of the Rack ?? Push Out), he continues at the table for the next shot. If he legally pockets the nine ball on any shot (except a push out), he wins the rack. If the shooter fails to pocket a ball or fouls, play passes to the other player, and if no foul was committed, the incoming player must play the cue ball from the position left by the other player.

2.6 Spotting Balls
If the nine ball is pocketed on a foul or push out, or driven off the table, it is spotted. (See 1.4 Spotting Balls.) No other object ball is ever spotted.

2.7 Standard Fouls
If the shooter commits a standard foul, play passes to his opponent. The cue ball is in hand, and the incoming player may place it anywhere on the playing surface. (See 1.5 Cue Ball in Hand)

The following are standard fouls at nine ball:

6.1 Cue Ball Scratch or off the Table
6.2 Wrong Ball First The first object ball contacted by the cue ball on each shot must be the lowest-numbered ball remaining on the table.
6.3 No Rail after Contact
6.4 No Foot on Floor
6.5 Ball Driven off the Table The only jumped object ball that is spotted is the nine.
6.6 Touched Ball
6.7 Double Hit / Frozen Balls
6.8 Push Shot
6.9 Balls Still Moving
6.10 Bad Cue Ball Placement
6.12 Cue Stick on the Table
6.13 Playing out of Turn
6.15 Slow Play

2.8 Serious Fouls
For 6.14 Three Consecutive Fouls, the penalty is loss of the current rack. For 6.16 Unsportsmanlike Conduct, the referee will choose a penalty appropriate given the nature of the offense.

2.9 Stalemate
If a stalemate occurs the original breaker of the rack will break again. (See 1.12 Stalemate.)