The game shall be known as “8 Ball Pool”, “Pool” or “Pub Pool” and referred to in these rules as "The Game". It is intended that the game be played in good spirit and in a sportsmanlike manner.
The game is played on a pub pool table with 16 balls

2. OBJECT OF THE GAME

The player or team pocketing all their group of object balls in any order, and then legally pocketing the black ball, wins the game.

3. COMMENCEMENT OF THE GAME (OR RE-START)

a. The balls are racked as illustrated with the black on the black spot.
b. Order of play is determined by the flip of a coin.
c. The opening player plays at the object balls from baulk. An object ball must be pocketed, or at least TWO object balls pass the middle line of the table to be classed as a “fair break”.
i. Failure to do so is a foul break and will result in the balls being re-racked.
ii. The opposing player then starts the game with two visits.
d. If the black is pocketed from the break shot, the balls will be reracked and the same player will restart the game. No penalty will be incurred. This applies even if a foul shot is played.
e. If the Cue Ball is potted on a fair break it is a Non-Standard Foul that is penalised by the turn passing to the opponent
f. Colours are determined by the first legally potted object ball. If one or more balls of both sets of object balls are potted then that
player must nominate his group of object balls
g. If a foul is committed, before groups are decided, then those balls are ignored in determining the groups to be played.
h. If a ball, or balls, are legally pocketed, this entitles the player to one additional shot and this continues until the player either:
i. Fails to pocket one of their own set of allocated balls, or;
ii. Commits a foul at any time. 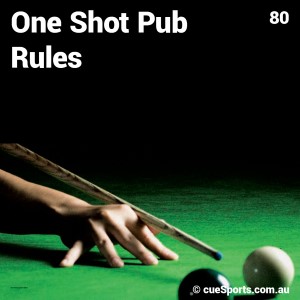 8-Ball is a Call Shot game (the ball and pocket must be nominated) and is played with a cue ball and fifteen coloured balls, numbered 1 through 15.

One player must pot balls of the group 1 through 7 (solid colours), while the other player has the group 9 through 15 (stripes). The player potting his or her group and then legally potting the 8-ball wins the game.

It is the opponent's right to ask which ball and pocket if he is unsure of the shot. Doubles and combinations are not considered obvious and both the object ball and pocket must be called. When calling the shot, it is never necessary to indicate details such as the number of cushions, doubles, cannons etc.

The balls are racked in a triangle at the foot of the table with the 8-Ball in the centre of the triangle, the first ball of the rack on the spot, a striped ball in one rear corner of the rack and a solid ball in another.

The Winner of a coin toss or lag has the option to break. During individual competition, players will alternate break in each subsequent game.

2) having the balls re-racked and having the option of shooting the opening break himself or allowing the offending player to break again.

The opening break is not a Call Shot. If any object ball is potted on a legal break, then that player continues his innings at the table and the table is open.

If a player goes in off or forces the cue ball from the table it is a foul and the table is open. All balls potted remain potted (exception: the 8-ball refer rule 7).

Selection of a group is not determined by a ball(s) potted on the break shot. The first legally potted ball after the break shot determines the groups. While the table is open it is legal to first hit any ball, (but not the eight ball) in the process of potting the called object ball.

* In The event of a team not being able to start at the designated start time…30 minutes is allowed…after this time a forfeit can be called or the team must start with existing players….matches that are missed are counted as 10 nil and are NOT to be replayed by a late arrival.

Safety play is defined as a legal shot. The player may choose to pot an obvious object ball and discontinue his turn at the table, or just play safe ( by doing a legal shot on his object ball )you don’t have to pot a ball.

Prior to the shot, he must declare a safety to his opponent. If this is not done, the player will be required to shoot again.

Note: Hair and clothing that touches a ball is not deemed a foul, UNLESS the shot has been witnessed, and the ball or balls have moved.

The penalty for a foul is for the opposing player to have the cue ball in hand anywhere on the table (except going in off the break, see rule 6).

Combination shots are allowed, however the 8-ball or opponents ball cannot be struck first by the cue ball.

Illegally potted balls are not respotted (except the 8-ball on break, see rule 7).

3) drive the cue ball or any object ball to any cushion. Failure to do so is a foul.

When shooting at the 8-ball, going in off or a foul is not a loss of game unless the 8-ball is potted or jumped from the table. The incoming player has the cue ball in hand.

When a player has ball in hand he may place the white ball any where on the table, the usage of a cue is permitted to manoeuvre the white. The cue or hand is only allowed to touch the white and no other ball.

c) Pots the 8-ball in a pocket other than the one nominated (exception: rule 7). 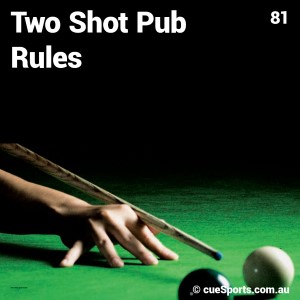 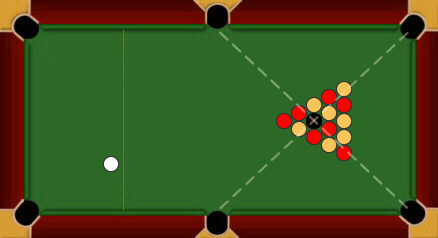