Snooker balls area unit a bit totally different to pool balls therein you'll be able to get snooker ball sets in 2 different sizes. A smaller two in. set that is right for taking part in on smaller English tables, and bigger two 1/16 in. ‘full size’ snooker balls for taking part in on a bigger dedicated snooker tables. The billiard ball during this case reains a similar size because the object balls still. despite what size you get, you'll get the subsequent balls with every set:

Just like nation ball sets, you're able to get each customary and Aramith sets for Snooker balls in each sizes, still because the additional premium ‘Pro-Cup’ set within the full two 1/16 in. size. 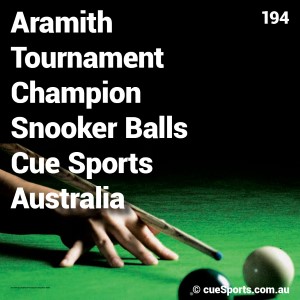 This full size 2 1/16” (52.4mm) snooker set is a genuine top quality premier ball set. These sets are used in Tournament matches throughout the world. This set is recommended by the World Professional, Billiards and Snooker Association (WPBSA) as the best balls for snooker and they are used in many World Championship events.

Phenolic resin for optimal rebound Maintains its high quality and condition for much longer than its rivals Aramith balls are the only balls in the world that are manufactured using phenolic resin. This ensures the balls retain their perfect shape, electric colouring, balance and weight far longer than any other ball sets. Aramith balls last on average 5 times longer than any other balls available on the market. If you love cue sports then you will love Aramith. 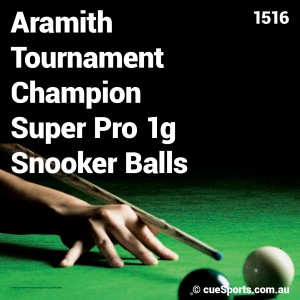 Aramith Tournament Champion SuperPro1G Snooker Balls are the very best snooker balls you can buy. Brilliant colours, superb durability with the most consistent and most accurate weight tolerance ever produced. Its no wonder then why these balls are the only choice the professionals and are the very balls used in all major professional snooker tournaments around the world. Aramith have supplied snooker balls to the World Snooker Professional Players Association (W.S.A.) for more than 40 years.

The Aramith Tournament Champion SuperPro1G Snooker Ball sets are unique and the highest quality available in the world. These snooker balls allow the W.S.A. professional players to reach the highest scores during the W.S.A. competitions. The main defining characteristic of this set is the maximum weight tolerance allowed. Whilst the maximum weight difference between balls in a regular Aramith Tournament Champion snooker sets (or a Super Crystalite snooker sets) is 3 grams (official specifications), the maximum weight tolerance of these special W.S.A. sets is only 1 gram! This means there will be far less inaccurate responses from the cue ball resulting in much better positional play as well as making delicate and very accurately required cannons easier to play.

If you are serious about your game then Aramith Tournament Champion SuperPro1G Snooker Balls are the only snooker balls you need to consider. The vast majority of domestic snooker leagues and clubs in the UK have now standardised to these balls.

Don't be fooled into buying cheaper snooker balls which are usually lighter in weight, with pale or washed out colours and are usually more easily damaged, resulting in a shorter life span. Cheaper lighter balls will make your table play much slower. A heavier ball has more momentum and makes the table play faster without the need for a super fast expensive cloth. 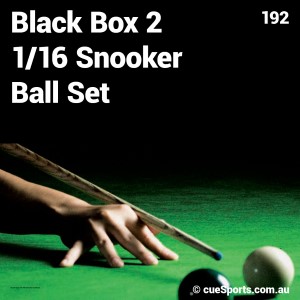 The Black Box Snooker Ball Set consists of 22 balls, each measuring 2 1/16" in diameter.

The Black Box Snooker Ball Set contains 15 reds, a cue ball, and one of each of the six scoring balls. 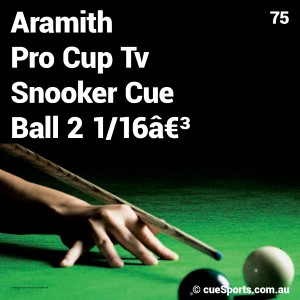 Aramith balls will retain their shape and sharp colouring far longer than any other manufactured balls.