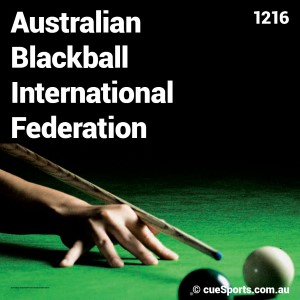 This is a new group aiming to promote the 8 ball game that is known as Blackball and is the recognised version of rules by the WPBA. Blackball is big in England and across Europe and is growing year by year as the preferred set of rules played by the players. In England there is a main tour event called the IPA this has been running now for many years and has over 128 players playing on the tour with more joining up every year.

Add County pool that is played in England to Blackball rules the game has a following of more than 1000 players in just England playing. In Europe they have 2 International events each year called the European Championships and the Nations Cup.

The Nations cup is a competition that Australia are aloud to enter and it is held at a different venue every year. These competitions are held in venues that can hold 40 tables plus at a time. Every two years the World Championships are held and again the venue is different for every event and countries can tender to hold the event, this is something that Australia Blackball would like to do in the coming years.

In the coming years we wish to grow Blackball in Australia by holding competitions and an annual Australian Championships. In 2014 Australia sent over a select 6 man team to the World Championships which that year were held in Perth Scotland. For many of the team it was there first big event, put this to representing there country it made for a very enjoyable event for all and one they can feel very proud of their achievements.

In 2016 the World Championships are to be held in Killarney, Southern Ireland at the Gleneagle hotel. It is hoped to send as many Australian teams as possible to this event in Men's, Seniors (over 40s), Masters ( over 50s), women's, under 18 & 23 events. If you wish to know more about Blackball pool as a game and would like to get involved then please do contact us for more information.