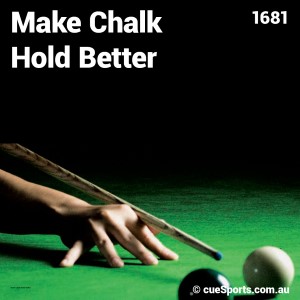 Do you want to make chalk hold to your cue tip better?

Technically anyone who answered no to that is in the wrong frame of mind somehow.  The Tip Pik (pictured) with its set of spikes will perforate the tip slightly thus allowing more chalk to be captured between the fibers.  This is great news if you want to cut down on miscues and gain better control over the cue ball.  Altogether a really great tool for the pool cue case.  Just don’t overuse it.  It can make a tip unusable for those who over-enthusiastically use this every two seconds.

Available from every good stockist of pool equipment.

Chalk won’t stick to my cue unless I scruff up the tip, but that only lasts for one game.

You may just have a really bad generic no-name tip. I have a pool table in my home and the couple “house cues” that came with the table have just bad tips. The tips stay on and are all properly shaped, but they just don’t hold chalk well even after scuffed. My regular playing shafts I have a predator victory super soft and a Kamui super soft and they both hold chalk just fine without ever having to scuff the tip and just using the common master chalk.

I always shape my tip prior to matches. I scuff after each game and if there are many innings or some difficult shots during the game, I’ll lightly scuff the tip during. It doesn't need to be ragged, just enough to raise up the edge of the leather. That is all you need to hold chalk.

Any suggestions on good tip replacements and where I could get that done, Check to see if your local pool room has a repairman in-house, if not then ask the other players who do their work, if all else fails, you can simply replace it by hand (though it's tedious, check youtube for more info). I use homemade milk duds, but any quality brand of a layered tip will do you just fine