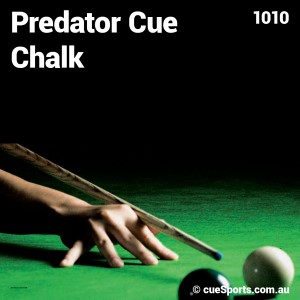 Rather than focusing on one specific area (like adhesion), Predator has chosen to make a chalk that has it all. Their product offers better spin, less miscues, and allows you to strike the ball more accurately. It also sticks to your tip pretty well ?? generally it only needs reapplying every four or five shots.

The end result of all this is that you won’t even have to think about your chalk when playing. Ultimately, this is what you want. In an important frame you need to focus on your next two or three shots, rather than how your chalk is performing.

With Predator, you don’t even need to be concerned about marking your hands or cue. Despite having good tip adhesion, this chalk doesn’t stain your body or equipment as much as most other chalks.

Predator chalk comes in sets of five octagonal pieces, rather than cubes. This might take a bit of getting used to but it’s not a big deal. It’s also pretty cheap ?? there isn’t really a better value chalk on the market right now.

After more than 5 years of research and development and three years of testing by the world's top pro pool players, Predator's 1080 Pure performance chalk is ready for prime time!

Using a special formula of pure silica, 1080 is all about performance and winning. When using Predator's chalk, expect improved accuracy, greater consistency, increased rotation, longer on-tip chalk life and better application coverage than standard chalk. Plus, it's shaped like an octagon. Because square chalk is so 20th century.

Did you know that we carry a pool cue chalker for the Predator 1080 Chalk? It fits that octagon shape perfectly and keeps your chalk nice and safe!