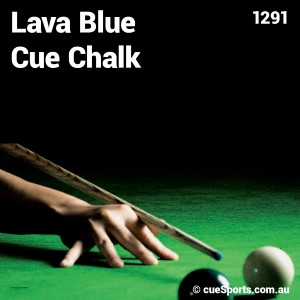 You demanded it, so they made it. The popular Lava performance chalk is now available in traditional blue. If you're not familiar with Lava chalk, here's the scoop:

Lava rocks are created from lava that flows at crazy high temperatures
These temperatures create viscosity
Viscosity equals friction
Friction is what keeps chalk on your tip (and as a result, reduces miscues)

The blue color is perfect for green or blue cloth. If you have red or burgundy cloth, check out the original rust colored Lava chalk.

Friction. It's the most important job of great billiard chalk. It's what holds your tip to the cue call for those critical milliseconds you still have control of your shot.

And we've discovered a material that has physical and chemical properties that maximize friction and optimize chalk retention? lava.

Straight from the Earth's molten core and recently a toasty 2000 degrees Fahrenheit, the key ingredient for our chalk is literally lava. Specifically, it's a basaltic magma that ends up as a rock called scoria. We take scoria, crush it, pulverize it, and convert it from volcanic slag to a powder. At that point, we use more traditional manufacturing methods, carefully calibrating our master blend to maximize the effects of the lava for billiard chalk.

But why is lava good for the end of a pool cue? Viscosity and paramagnetism. Every rock we use is the result of lava that only flows at incredibly high temperatures. It takes these thermal extremes because of its high iron content. Once the lava transforms into rock, it reacts on a subatomic level with water, essentially gluing hydrogen bonds together, trapping moisture. The effect of this process is called paramagnetism, which creates viscosity thousands of times higher than water. Viscosity equals friction and friction is the single purpose of billiard chalk.

Lava Chalk? is for real. Try it and see for yourself.